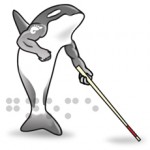 Welcome to Episode #059 of Linux in the Ham Shack. On this edition, we talk with Jonathan Nadeau of Frostbite Systems about Linux for the sight impaired. Jonathan, being a blind Linux user, has overcome many challenges when it comes to using his favorite operating system and he shares with us the ins and outs of accessibility on Linux systems. There is a Linux distribution dedicated to blind users called Vinux, along with an accessible version of Arch called Talking Arch. Even newer versions of Slackware are jumping on the bandwagon with a Speakup enabled installation kernel.

This is also the first episode of LHS with a blooper reel left in at the end. Listen all the way to the last so you don't miss out on any of the fun. Many thanks to Jonathan for his time and expertise, and many thanks to our listeners for making our show so fun to do. 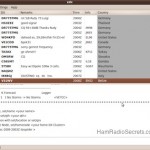 The season of Linux fests is now under way. The Texas Linux Fest took place a couple of weeks ago. By all accounts, the turnout was excellent, the educational opportunities were plentiful and fun was had by all.

Oggcamp in the UK is next on the list. Then there will be ham fests and Linux fests all over the country and the rest of the world for the rest of the spring, summer and early fall. Linux in the Ham Shack will be represented at the Dayton Hamvention in May and at the Southeast Linux Fest in June. I'm also trying to start a new Linux fest called the Mid-America Linux Fest which will be held in early November. It's possible that could be November of 2010, but it's more likely to be November 2011. If you want more information about the Mid-America Linux Fest or are willing to volunteer your time or services, please check out the Web site at https://midamericalinuxfest.org.

And yes, I know this episode of Linux in the Ham Shack is late. Life has been very busy of late and I think all of our listeners for your eternal patience. We hope to see you at the live recording of Episode #037 on April 27th at 8:00pm.